Never I thought I will break up so easily.

The burden of life becomes too much.

Sitting at the airport


So i am leaving for my home town. I arrived at the airport quite early....very early. One of my friend told that their is lounge area before getting the tickets and I can go and rest their.

But as it happens most of time, these are inaccurate information.  lounge area was there only after the security check.

So now I am waiting , before I can get tickets.  So what to do.

Not habitual to listen to music late at night, no interest in watching movies , having no book to read.
Can't run, Can't stretch in public.

So only option left is watch people. :)

One person is managing her bags. Some airport staff are checking out girls.  Person few chairs next to me also have nothing better to do, but just moving his hands over his beard.

nothing special happening. No one is looking suspicious. then how can I make a great suspense story.

Sud I do something. rather than looking for a character outside ..sud i be the character and the narrator .

There is a couple who came and just sit next to me.  having 2 buttermilk packet. Who drink butter milk late at night.

Also this is diwali weekend . So lot of airport staff is in traditional dress.

Still 20 minutes to go before i get my tickets.

So in a snapshot if u see the plot is ready.

Anything can trigger my story to move ahead.

Anyone security threat...somneone bag missing ...some one child missing... some one missing flight due to match.

But in reality nothing is happening.

one person has opened his bags...there is saving kit ...2 jeans ...but nothing of importance.

person next to me, the couple I told u about ...was combing his hair...which he is losing. Now they are taking selfies.  this is biggest idiotic thing now a days in fashion.

One person is wearing red devils jacket...aka man united fan .. team i dislike the most.

Well  time for me to leave ...lets see after I go to lounge do i find something good.

Pitch Dark : Someone sitting in a corner , Place seems to be like a space observatory lab.

Faint blue and green light coming out from Monitors. Constant buzzing sound from all the machinery running.

Slowly , Slowly voice can be heard more clearly, the person is talking to himself.

Unknown@thispoint " What the hell is wrong with us , now a days ? We waste so much money trying to find some alien life...as if we treat our fellow beings nicely . What is they come and conquer us , or eliminate us....why not focus on something on hand"

Stares at the giant screen in front wall, which is displaying some orbits and some numbers are constantly changing at left bottom corner.

Start whistling in low tune, makes action as if enjoying the tune he is playing. Stares at the watch in front, its  14 AM in the morning, still  7 hours to go before sun is out and his shift will end.

9 AM in morning , sky is bright red , in middle of a place which seems to be desert , there is a building, only top of the building which is dome-spaced is coming out of land.

Faint voices can be heard :

Voice 1) " There has to be some glitch....our satellite has passed that place so many times but we never got anything"

Voice 2) " Is it possible, that something might have come now ? "

Voice 1) " Thats impossible ....our other satellite would have picked it up if that thing entered our zone....Its as if it appeared out of no-where"

Voice 1) " Well ....we can inform everyone or we can see how long this thing is visible on our radar"

Voice 2) " I am more comfortable with first option , Answering questions once this thing disappears will be more difficult"

Inside something which appears like a spacecraft, 2 MEN discussing something.

Man 2) "Mayb ..they are deciding whats needs to be done "

Inside the dome ...multiple voices can be heard and also someone humming.

Voice 2) " Invite ...seriously ...we don't know anything about them...their intentions...their capabilities.......We should put them in quarantine "

Voice 3) " They might consider that to be hostile act "

Voice 2) " But we need to take adequate precautions "

Humming stops ...Voice 4)  " Why not simply contact them and ask who they are ...where are they from "

Sound of keyboards buttons being clicked in fast manner.....

Voice 4)  " They don't understand any of our languages "

Voice 1) " What are the chances , that meaning of images will be same in our world and theirs "

Voice 4) " I think either they don't understand our images or we are not getting them...I send them smiling face ...and they have send something ...which I haven't seen before...what type of creature is this "

Spacecraft seems to be landing near dome ... Two men  descending.  A small door in dome opens ...4 shadows falls on ground ...whose lengths start to reduce.

The two men looks at the 4 person in front of them and are startled.   They have one Big Eye and one Small eye ....they are half of them in height...No protuding ears ...long arms ...at end of whose there is web.

" It seems that rather than they coming to our world......we have arrived in theirs " 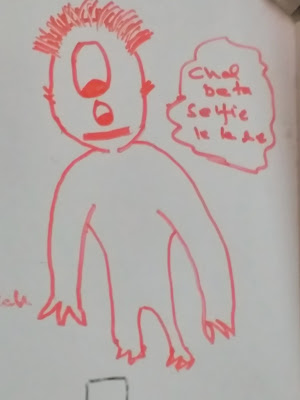